I've seen a number of videos of people playing accordions that have no visible treble switches even though they do produce sounds for more than one register. (A great many such videos in Alberto Damaso's "Accordionistas Portugueses" channel.) This seems to either be a Portuguese-preference thing, or a Beltuna-specific thing.

Apparently these have switches on the underside of the keyboard. See, for example, this demo of a Beltuna Prestige 1050 CBA, where you can see the player's hand reach behind, make a click, and reappear. The specs on Beltuna's website say "5d" rather than "5" for "number of registers."

Does anyone happen to have a photo showing the back side of the instrument and the switches? Are they easy to use and in no danger of being bumped by one's beer-belly? Or do such instruments have to be played sitting rather than standing / require more time to make register changes than standard switches?

(Just curious, nothing urgent. Barring a surprise inheritance a rich uncle's closet, I do not see a new Beltuna coming into my life anytime soon.)

The registers behind the keyboard is very common in "French style" accordions. Most accordion manufacturers make French style accordions with registers behind the keyboard. Typically there are something like 5 or 6 switches, and they are levers that go up and down so the actual number of register settings that can be controlled is double that number.
Often French style accordions also have reed plates nailed on leather or cork instead of being "glued" to the reed plates with wax.
A while ago I had a nice "Piermaria" (with very good nailed Antonelli reeds) in for tuning, but I didn't take pictures of the registers. Sorry.
Inside the register mechanism is the same as in any other accordion. It's just the way the switches are positioned and operated that is different.
Most such French accordions are button accordions, have a relatively large number of notes in a small body, are thick (they need room to fit 6 reed blocks to accommodate all these reeds/notes) and have a decorative all-metal shiny grille. And despite the fact that the French almost all play C system accordion manufacturers make them in B system as well. (The one I tuned was B system.)
Last edited: Sep 28, 2021 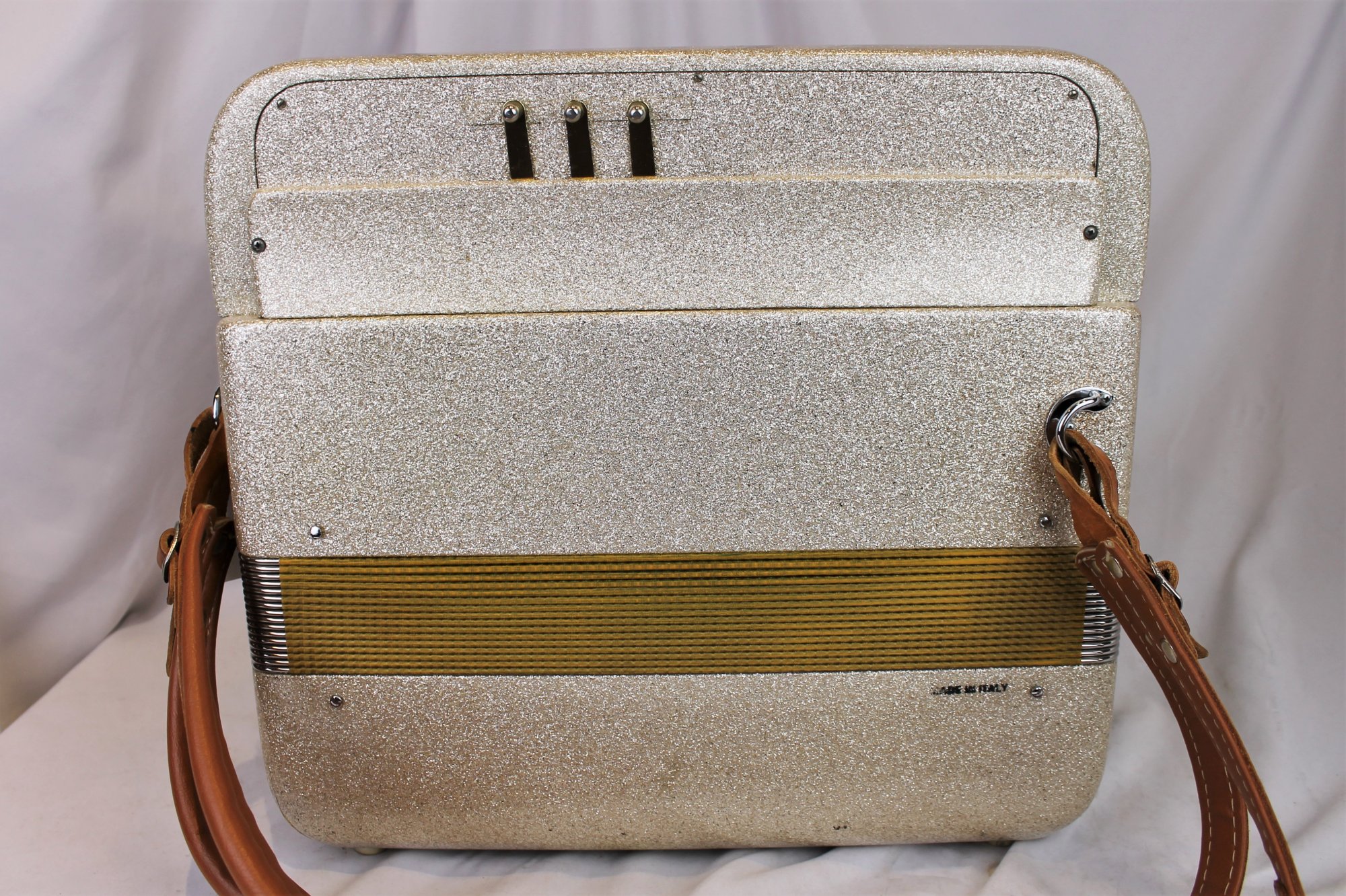 Like this? For some reason, manufacturers and stores don't seem to post pics of the back of the instruments. I think these are both Fratelli Crosio accordions. I couldn't find any pics of Beltunas.

Here is a used Beltuna.

Neither do accordion repairers (take pictures of te back side)... I did not even take a picture after opening up the back side (to fix a slow responding button)...
D

Also, back when this got started, the French didn't need their thumbs to operate the keys, so it was convenient to be able to use them to operate the register switches.

It seems to me I have had an incident where my shirt changed the register setting, but it's quite rare, and probably even rarer than rare for those who play sitting down.
S

I appreciate the replies (and seem to have outed myself as knowing very little about French accordion styles - yup, guilty as charged.)

It does seem like it makes another part of the instrument fragile, for no particular gain - but I can believe it made historical sense when people didn't use thumbs on CBAs.

Siegmund said:
I appreciate the replies (and seem to have outed myself as knowing very little about French accordion styles - yup, guilty as charged.)

It does seem like it makes another part of the instrument fragile, for no particular gain - but I can believe it made historical sense when people didn't use thumbs on CBAs.
Click to expand...

Actually not so fragile. The bulge you see in the picture of the Beltuna makes it less likely that you will "snag" on a lever while playing. These levers are also quite sturdy (all metal), unlike the often flimsy register switches placed on the grille (that I had to repair on several occasions).
Playing with the thumb is no issue on these instruments. On both these and regular register mechanisms you do learn where which switch is and can hit it quickly while playing. (Of course, chin switches will always be more convenient, but they are really prone to being pressed by accident in the unlikely event of you looking down and thus lowering your chin.)
D

Of course I've never been near a chin switch, but it seems like there you're talking about a really vulnerable location.

The mechanism on my old Fratelli Crosio is sliders instead of levers - four vertical metal strips, bent up and back down to make little thumb holds, pinned to other metal strips at more less right angles that work the register mechanism, all pretty much out in the open. The mechanism is rather stiff, but I sort of vaguely recall that one register wasn't so stiff - and once in a while would succumb to gravity.

donn said:
Of course I've never been near a chin switch, but it seems like there you're talking about a really vulnerable location.

I guess "vulnerable" is just the negative side-effect of a very "convenient" location to change registers with a body part not busy playing notes.
L

A long road travelled - made easier carrying a box

They are indeed strong (compared to normal registers), conveniently placed, and I've never snagged one either...

It's not just limited to CBA accordions... my Hohner Morino has them on both the left and right hands:

You must log in or register to reply here.
Similar threads