I’ve never seen a keyboard like that. (Apparently the”uniform keyboard” for which the group is named?) ...And the odd thing is that each of the players, even though their instruments appeared to be of different, otherwise nondescript makes/models, all were equipped with that same unusual keyboard!
Last edited: Mar 24, 2021
D

This sort of post is infuriating.
I did a google on Gary Blair - seems quite a figure in accordion circles but no sign of him behind a uniform keyboard, just PA.
And if the Chinese just make inferior copies of PAs from the West, how come they have the time and energy to make obscure keyboard models, form groups and keep time playing a classic Scottish melody.
We need to know more about China for all sorts of reasons.
Intriguing.
PS. I'd rate them better than a fiddle orchestra and any concertina group I've heard.

I am curious to learn about the purpose of the “uniform keyboard.” In other words, as we engineers will often say whilst challenging one another’s’ designs: “What problem are we trying to solve here!?” Or, more colloquially (and judgmentally), “If it ain’t broke, don’t fix it!”

Scuromondo said:
I am curious to learn about the purpose of the “uniform keyboard.” In other words, as we engineers will often say whilst challenging one another’s’ designs: “What problem are we trying to solve here!?” Or, more colloquially (and judgmentally), “If it ain’t broke, don’t fix it!”
Click to expand...

There are several defects of the piano keyboard. Among them: diffferent fingering for each scale; keyboard needs to be longer for the same range of notes; if the width of keys is reduced to reduce the length of the keyboard then fat fingers will not fit between black keys. Of course a lot of folk learn to play a piano keyboard, so piano accordions are attractive to them. I think that if keyboards were being designed from scratch now with no history of the piano then it is unlikely that the piano keyboard would be invented. At the time the current design became fixed, about 300 years ago, the range of technical and material resources available to instrument designers and makers was much smaller than we have today.
V

It was the late Jimmy Blair (of Scotia Players fame), father of present day accordion wizard Gary Blair who pioneered the use of an alternative keyboard system in Scotland in the 1950’s – the Uniform Keyboard (U.K.). Although the idea was good, like Esperanto – the universal language – it didn’t catch on and in time faded completely from the scene. Gary has been keen for a number of years to obtain one of these rather unusual instruments. Can you help him? Do you have one in your attic? If so please let Karin know and we’ll put you in touch with Gary.

The U.K. was invented by an American accordionist John H. Reuther and in an article from 1953 he tells us all about why he developed the instrument.

“It is obvious that the faster the student can learn, the faster he can be moved to a full-sized keyboard. This is one of the main features which the Uniform Keyboard has to offer – cutting down the study-time normally required on the piano keyboard to less than half.

The development of the keyboard on the piano was retarded because the instrument is not portable. Obviously, it was necessary for the pianist to have an identical keyboard at the scene of his engagement as that which he practiced on at home. Therefore, all attempts at improvement in key arrangement on the piano came to a standstill about two hundred years ago. The piano keyboard is so taken for granted that its defects are thought to be necessary evils and most teachers have heretofore ignored their existence. However, the need for improvement has been recognized for a long time.

A few inventors have suggested reforms during the past 60 years, the most notable being the ‘Janko’ keyboard of 1882 and, more recently, the ‘Chromo’ keyboard (which appeared on accordions in the early 1920’s). However, although these developments were a step in the right direction, they did not eliminate the main difficulties of the piano keyboard.

The greatest stumbling-block on the present day keyboard has been lack of uniformity when transposing from one key to another. From time to time, a few special keyboards have been built at enormous expense to get round the limitations of the piano keyboard. For instance, Irving Berlin had a piano build with a special mechanical transposing feature in order to facilitate his composing.

Actually, what I have done is to assemble in one keyboard the best features of the ‘Janko’ keyboard, the ‘Chromo’ keyboard and the piano keyboard respectively. The black keys are arranged in groups of twos and threes and, therefore, it is really an improved piano keyboard. The long narrow black keys have been replaced with wide black keys which provide a larger landing area for the finger tips.

Uniformity in Both Hands

It is no longer necessary to reach into the narrow channels between the black keys, which is a particularly bad feature of the present piano accordion keyboard.

Because the keyboard is uniform on the bass side, the value of that uniformity is lost if it is not matched by uniformity on the right hand. This is especially apparent in learning scale and chord fundamentals. The basic chords, scales and arpeggios are absolutely necessary equipment for the beginner if he is to progress at all. If the student has to wade through twelve different Major scales, twelve different Minor scales, etc as well as twelve each of the numerous chords and their inversions, which have to be mastered on the standard piano keyboard, progression to a full sized accordion can be considerably delayed.

Well Mr Reuther had obviously applied a lot of thought to his design but with the exception of Jimmy Blair he failed to convince those ‘key’ individuals – the accordion teachers of the time. Had he been able to do so history might have been different and the Box and Fiddle might regularly have contained photographs that looked like this.

Remember to let us know if you know of one. 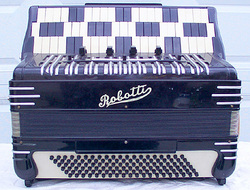 apparently the original or close to it
D

losth's - I must get used to emojis.
'infuriating' didn't mean irritating - I just end up down a 'googlehole' wondering 'how'd I get here?'
Thanks for the info.
ventura - re: 'The U.K. was invented by an American accordionist'
I think we go back a bit further than that.
V

one has to take the way China manufactures things...
the factories on Pearl River are huge, began through reverse engineering
European and American instruments, and have always used dozens if not
hundreds of brand names at each factory

they make up names that sound like famous ones, or buy up
names from defunct brands, or sometimes just bootleg the names

as you know, quality varies widely though eventually they seem to
learn how to make some decent instruments
V

also, i am remembering Gary Blair got involved with CooperFisa
in Italy for a time, and may have re-introduced the idea of that funny old
Keyboard his dad liked

CoOperativaFisarmonica had an old History, then a dormancy, then
a new history in accordion making and distribution outside of
the CastleFidardo area of influence
Last edited: Mar 25, 2021
S

While fully realizing that “there’s no accounting for taste” and “beauty is in the eye of the beholder” I must admit that, as functional as it may be, the thing looks fairly hideous to me.

dunlustin said:
This sort of post is infuriating.
I did a google on Gary Blair - seems quite a figure in accordion circles but no sign of him behind a uniform keyboard, just PA.
Click to expand...

On my laptop Google gives these results:

Corinto said:
On my laptop Google gives these results:

Google is wrong (again). The first hit (Le clochard) is indeed played on a uniform keyboard and the second hit is played on a Kravtsov keyboard.
G

Thank you for your input . I should point out that 70 percent of them are beginners . One of the players had contacted me and asked if I would send a video of me playing the uniform keyboard ( I hardly ever play it ). Next thing , I was sent several videos of these players and thought it would be a bit of fun putting them all together as one .
Looks like it wasn't such a good idea going by some comments
Regards
Gary
G

dunlustin said:
This sort of post is infuriating.
I did a google on Gary Blair - seems quite a figure in accordion circles but no sign of him behind a uniform keyboard, just PA.
And if the Chinese just make inferior copies of PAs from the West, how come they have the time and energy to make obscure keyboard models, form groups and keep time playing a classic Scottish melody.
We need to know more about China for all sorts of reasons.
Intriguing.
PS. I'd rate them better than a fiddle orchestra and any concertina group I've heard.
Click to expand...

I had no idea ( before being contacted by a girl from China ) that the Uniform keyboard was still being made .
It is down to one lady in China who's father was gifted a uniform accordion back in the 50's/60's
She approached a factory over there and asked them to produce these . As previously stated , they are only playing a scottish melody because she asked me to send a video of me playing the uniform . ( which I very seldom do )
Snd for what it's worth ...the tune " Skye boat song" was composed in the 1800's yet I had a copyright claim within seconds from the makers of the tv programme " outlander" as they used it as their theme tune .
gary
You must log in or register to reply here.
Similar threads