I have in my posssesion an Elkavox S11 accordion as well as what I believe to be the tone generator with foot pedal. The world of older midi accordions is very new to me so this one poses some questions for me, as well as one issue.

The issue is getting sounds out of the tone generator. I assume it is such as it is a separate component where the accordion and foot pedal plugs into, has midi in and out, has left and right 1/4” outs, a volume knob, a switch to switch between accordion in or midi in, and a switch labeled pedal rhythm cancel. The volume pedal also has switched which activate fills or intros. Anyhow, it seems no matter what configuration of things I have tried, I cannot get midi sounds out of my speaker (connected to the L/R outs of the tone generator). I have tested the midi out into my computer using the Midi-OX software and that seems to work fine (and I can trigger instruments in fruity loops). I have tried several different configurations of cables (TS, TRS, Y cables), speakers (powered and passive) and computer sound cards via the 1/4” outs and no sounds are generated. I have tried with and without footpedal plugged in (midi-OX still shows signals being sent) as well as physically turning registers on and off on the accordion (there are offs for both the bass and treble reed banks) and also operating the bellows while pressing keys and/or buttons. Nothing. So am I missing something that is an easy switch or not wiring things properly? Is this even the tone generator? (It does say Elka s11 so it matches the accordion).

Conversely the internal physical mics all work very well utilizing the 1/4” out in the accordion itself.

All of the fuses are intact. Internally the tone generator shows no visible signs of overheating on any of the boards or wires.


Some questions elsehow now. My midi-OX readings seem to want to indicate two things I find peculiar. 1). The keys are touch sensitive. 2). There is no midi for bellows control (which would explain touch sensitive keys even though that is the opposite of how an accordion works!). Are these two things true? If so does this mean at the time of this things heyday they hadn’t figured out how to use the bellows to actuate midi? Something else?

My final area of question is this; is there some form of physical maintenance that must be done to the internal midi components of the accordion itself? I ask because one of the keys isn’t functioning 100% of the time and I have read about others with similar issues doing things like sanding between physical contacts to eliminate corrosion and voila.

Anyhow, long post. Acoustically this instrument sounds fantastic, it would be so much better if I could get the digital sounds out of it though.

Thanks for looking!
G

Good Morning Mr Mark , I just did a search Elkavox s11 accordion on google . several sites came up, one of particular interest was on Ebay Uk offering complete service manual and technical drawings ...............take a look !! .......Good luck in your quest

A single google search brought this up: 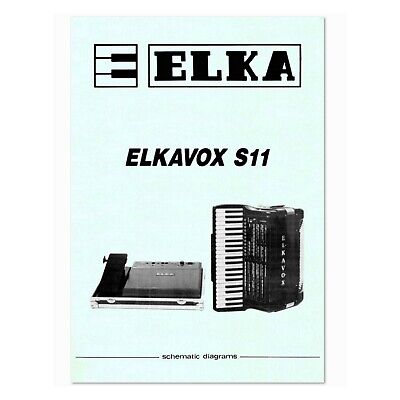 Generally speaking they are not all that complex, and a few hours spent playing around with one is worth more than reading a manual.

I'd be pleasantly surprised if your had touch sensitivity, as back in "those days" mostly there was nothing but MIDI on/off signals sent out from the Elka units. Connecting them to a MIDI sound generator like ones from Yamaha were FB-01 were all the rage... something that I also own. The sounds back then were near revolutionary for the day.
Last edited: Jun 6, 2022

Thanks for the replies.

It seems the box is dead and in need of a discontinued chip .

As for touch sensitivity Jerry - impossible to tell really without the box, however the midi test program I was using certainly indicated different readings depending how hard things were pressed.

Your other comment seems to answer my next question on wether or not other boxes can be used with this. At this point this is the only answer other than my next question; can the accordion cable be modified to interface directly with any midi system? I believe the cable is currently 8 or 9 pin and the midi is 5.

Longshots here, trying to get this going again for a very good player indeed.
C

Mr Mark said:
Your other comment seems to answer my next question on wether or not other boxes can be used with this. At this point this is the only answer other than my next question; can the accordion cable be modified to interface directly with any midi system? I believe the cable is currently 8 or 9 pin and the midi is 5.
Click to expand...

I don't know this very subject, but I know two "adjacent" ones: by Roland (for MIDI-ready guitars) and by Yamaha (for wind controllers). These connections feature DC power for the input device plus MIDI. - Small help, but I hope this gets you going.
You must log in or register to reply here.
Similar threads